Open presentation of the project “ΝΕΤΤΕ: a kinesic experiment” by the photographer Artemis Pyrpili

The project “ΝΕΤΤΕ: a kinesic experiment” is the result of the Artistic Residency of the photographer Artemis Pyrpili.

It is based on the homonymous photo book of the creator.

Is an attempt to record a kinetic improvisation with a starting point and in interaction with archival images of Nette, in motion. The kinetic expression will be structured in the natural landscape of Syros (in coherence with nature as a background in the archival images) allowing any result that can arise through this internal “fermentation” of experimentation/improvisation based on the interaction with the kinetic expression of her grandmother.

The aim is to further connect the personal relationship between granddaughter and grandmother, but also to explore the broader connection between photography and dance.

The final result will be a video that includes both the archival images and the recording of the kinetic experimentation as through this it will apprehend the expression and physicality of Nette while exploring the movement through its recording. 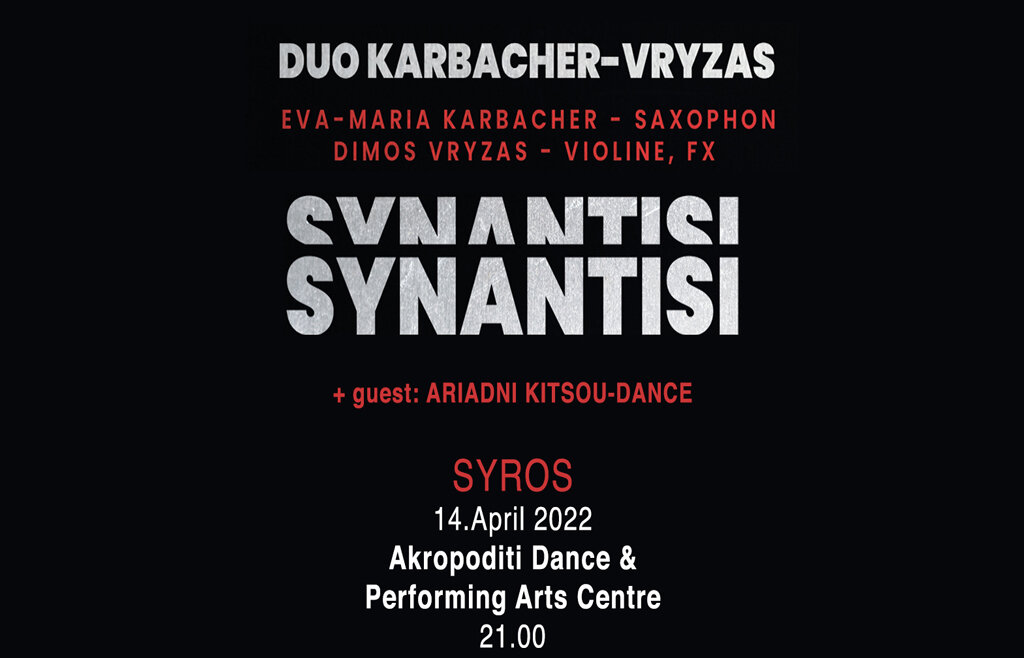 The duo is based on the love of sound in all its different appearances. Creating a musical language in a communicative-collaborative manner, listening to each other, experimenting with different sounds with no restrictive judgments.
Eva-Maria Karbacher and Dimos Vryzas met during their Performance Master at the Musikakademie in Basel where they studied Free Improvisation with Alfred Zimmerlin and Fred Frith. In these two years the two musicians worked intensively together, founded Karbacher Vryzas Duo and recorded their first album “coexisting” in December 2018.
With  Dimos Vryzas currently being based in Athens and Eva-Maria Karbacher living in Basel, the duo profits from the connection and exchange between Greece and Switzerland.

Karbacher/Vryzas Duo shares a common point of view over improvisation (nothing prearranged or anticipated) which allows them to build a unified sound.
Being aware of needs of the moment/sounding, encountering each other in an open field with no paths as yet defined. There is no correct way to listen, except to be present and challenge our habits over again.

Dimos Vryzas is a violinist, improviser, songwriter and composer from Thessaloniki, Greece.
Since some years his focus in music has moved on Free Improvisation. He studied Improvisation with Fred Frith and Alfred Zimmerlin.
With a unique approach that comes out of a comprehensive spectrum of influences, from classical and folk music to rock, noise and ambient music, he is interested in exploring the limits of the instrument, work with the contrast of acoustic/electric sound and find new ways of expression within music.
He has collaborated with many composers, visual artists, directors and dancers in various interdisciplinary projects all over Europe. In the last years, he has been travelling, recording and performing with many great musicians in Greece, Switzerland, Portugal, France, Belgium, Germany and more.
http://dimosvryzas.com/

Eva-Maria Karbacher, born in Zurich in 1992, is a saxophone player and improviser working in fields of free improvisation, experimental music and contemporary music.
Her music explores all the different sound possibilities of the saxophone and combines them with melodic elements. Improvisation and a curiosotu for finging new sounds is at the core of her musical work.
Eva-Maria Karbacher performs all over Europoe as a solo improviser as weel as in various formations and ensembles, such as the Duo |Karbacher-Vryzas| (with Dimos Vryzas, violin) or the Duo |Around the Corner| (with Victor Barcelo, percussion).
Eva-Maria Karbacher is currently based in Basel, Switzerland.
http://www.emkarbacher.com/ 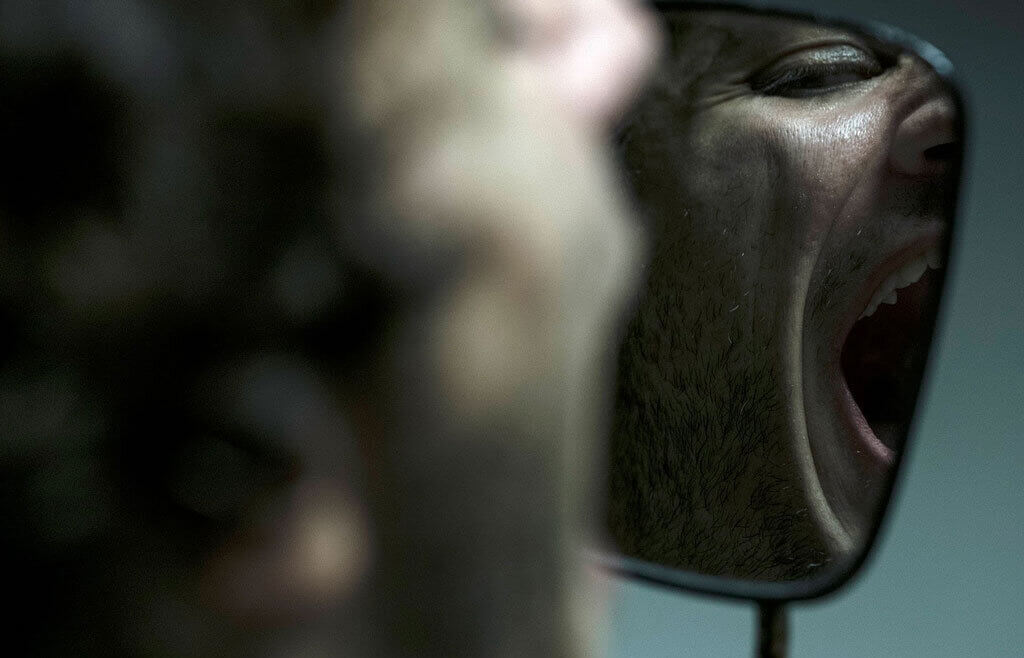 Athens, present, today A man’s home; his most personal and sacred space is trans-formed into an urban single life myth hideout. Aspects and parts of his character reveal ways and escape routes from his every day life.

Following the solo performance of a woman who resides at 36 Pythonos St, which was premiered May 2020, a new peephole opens up from the apartment across the street. At 11 Krissis St, the audience becomes the observer of another intermediate space, where the personal becomes public bringing into the spotlight the man that stands be-fore the world yet even more before his own self.

“FLUTTER” has been sponsored by Hellenic Ministry of Culture and Sports 2020-2021 which premiered in December 2021 at BIOS  in Athens.

VASSO GIANNAKOPOULOU
She was born in Athens, Greece in 1971. She studied dance at the State School of Dance and graduated from the Visual Arts Center in Athens in 1994.
In 2003 she presented her first choreography “Night Mirror”, with which she participated at Kalamata International Dance Festival and Athens Dance Festival.
In December 2004, together with light designer Tassos Paleoroutas, she co-founded Dalika Dance company and has choreographed all of the company’s productions “Digono”, “Fyllo kai Ftero”, “Nowhere”, “Noble Escape”, “Maria goes to the river”, “Pythonos 36”, ” Flutter” presented in theatres and International dance Festivals in Greece and abroad. She was a member of the choreographic team in the opening and closing ceremonies of the Olympic Games 2004 in Athens and at the 1st European games in Baku 2015 by the artistic direction of D. Papaioannou.
She is a founding member of the “Syndesmos chorou”, a group of Greek choreographers who have been collaborating for a series of projects presenting at Kalamata International Dance Festival, Athens & Epidaurous Inetrnational Festival and theaters in Greece.
She has been collaborating as a choreographer for theater groups and has been teaching contemporary dance and Feldenkrais method.
The company has been subsidized by the Ministry of Culture 2020-2021 for its new production “FLUTTER”.

NODAS DAMOPOULOS
He was born in Athens in 1986. He was engaged in a number of individual and team sports as well as with classic athleticism in a level of championship, receiving nation-wide honors. He then entered into the dance studies. He graduated from Despina Grigoriadou’s Professional Dance School and from the Athens School of Physical Education and Sport Science with specialization in “Orchestration” and “Greek Traditional Dance”.
He has collaborated with: Agni Papadeli, Christina Sougioultzi, Patricia Apergi, Mariza Vinieratou, Iris Karayan, Tzeni Argyriou, Sofia Mavragani, Christos Papadopoulos, Charis Kousios, Natassa Avra, Filippos Vassiliou among others, participating in performances in Greece and abroad. Ιn 2018 he participated in Onassis’ educational program for stu-dents “Dancing to Connect” as well as in the movement Workshop for people with and without visual impairments ‘IDANCE’ (2016). He has experience in track and field coaching, in greek traditional dance teaching as well as the last years he has been busy with specialized training. He is interested in a partnership of sports and dance, and in particular in its artistic imprint in performative practices. 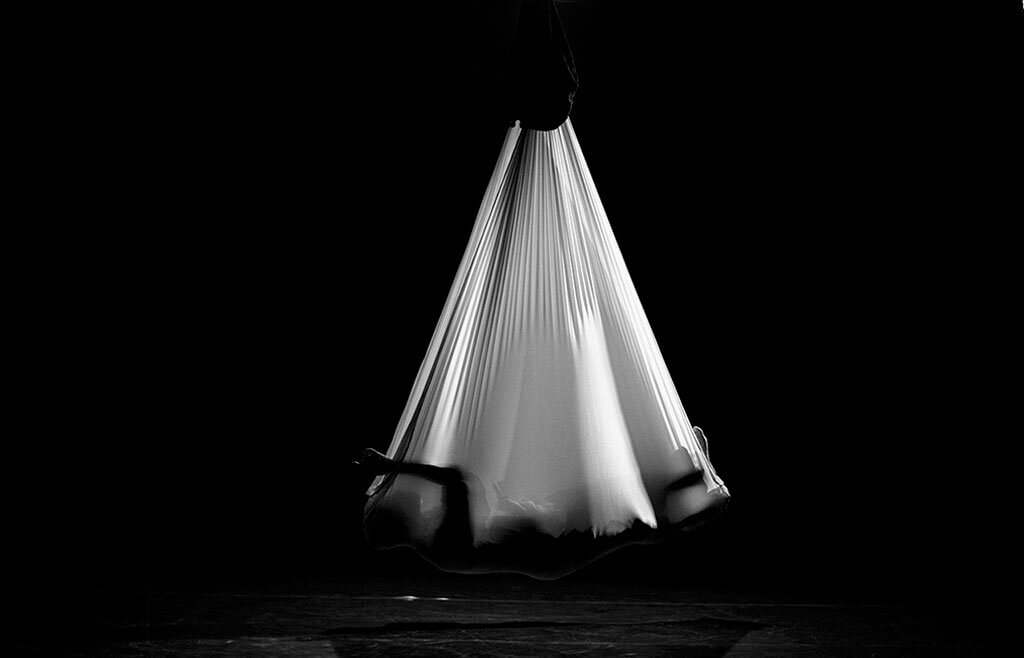 “ADAMAH”There is an etymological link between adam and adamah. Adamah designating “red clay” or “red earth”, Adam is the name given by God to the first man on earth. According to the Old Testament, God created Adam on the sixth day of creation from a little clay, clay or dust according to translations. Eve, the first woman, was created from the body of Adam according to the Book of Genesis. Of the union of Adam and Eve, were born Abel and Cain: Adam is therefore the founder of humanity.This production has unfortunately been freezed during the lockdowns. This among of time as a break, has nourished my creativity and artistic vision about the piece.

Adamah is a living organism, fixed in a neutral space, a place of all possibilities. The piece is thus composed of a choreographic and performative product. Between intimate and extreme, between inside and outside, between dream and consciousness. An eternal return to the origin, to the initial impulse, for another continuation.This piece comes from an observation, the acknowledgment of a failure the world we live in is inexorably damaged, because of self-destroying mankind, and civilizations declining and dying out Adamah offers a utopian vision of the world where I would like to be able to live, a world in where I wish to see humanity in harmony Indeed, I aspire to plural harmony to live better with others, without any race, culture, religious or political persuasion ostracizing anyone without giving up on the universality of the human condition.Trailer
Larbi Namouchi: Choreographic Artist / PerformerBorn in 1984 in Tunis, fascinated very early on by the circus and martial arts, Larbi Namouchi, as a child, began with Hip hop dance, traditional and Sufi dances. Between 1998 and 2005, he joined companies like Syhem Belkhodja, Imed Jemaa, Nawel Skandrani. In 2005 he won a scholarship and studied at the International Academy of Dance in Paris, within a multidisciplinary training (Theater, Jazz, Contemporary). Since then he has worked and multiplied meetings, exchanges and collaborations with many choreographers and artists from different disciplines such as, Yan Lheureux, Fabienne Berger, Boris Charmatz, Benoit Lachambre, Tonia Shilling, Abou Lagraa, Sandra Martinez Dahou, Omar Ghayatt, Christophe Honoré, Ashley Wright. In his choreographic influences, we can note the research work of Steve Paxton. Larbi Namouchi participates in several festivals, video dance projects, films, performances. In 2017, he founded his own company in Lyon, named Compagnie Shafak (=“dusk” in Arabic). He has never stopped working and exploring through his works and those of others, while remaining free and mobile, body and mind.https://vimeo.com/user9763163
Back 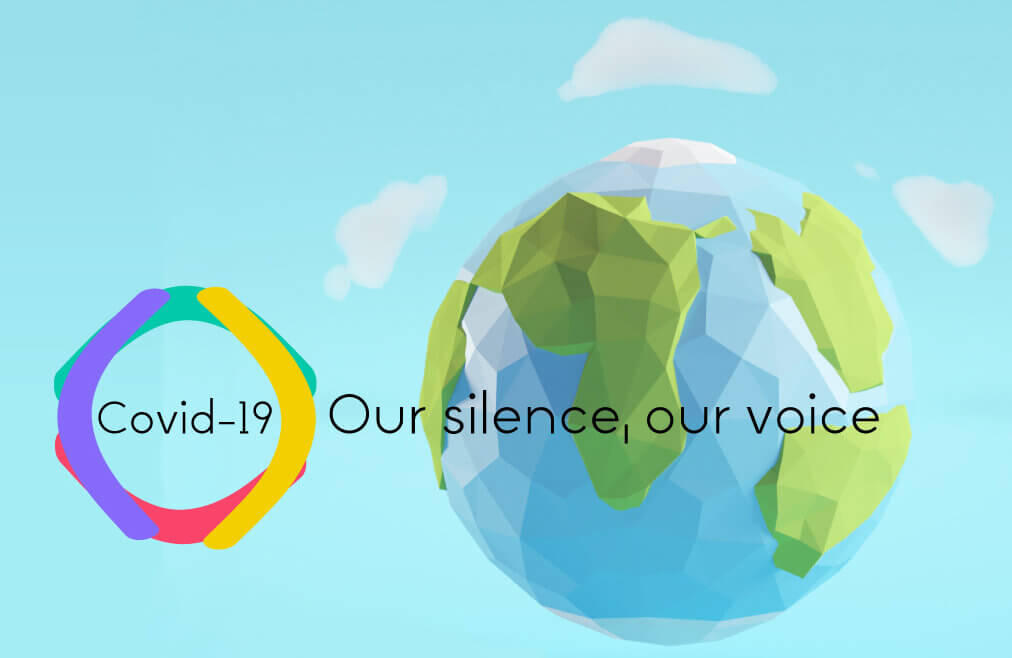 Covid-19: Our silence, our voice

Open call for the Artistic Residency Program of the Akropoditi Dance and Performing Arts Centre (2022-2023) with the following topic:
Covid-19: Our silence, our voice
While being neither at the beginning nor at the end of this turmoil, it seems perfectly timed to turn our experience into creativity.

Triggered by both the world’s voice and silence that has been shared since the outburst of the pandemic, we invite worldwide artists who take action into several aspects of art -such as performing and visual arts, photography, music and literature- to submit their proposals for the creation of a project which sets its roots individually aiming at a global outcome.

All applications are to be submitted electronically to our official site online from 15 January 2022 to 15 April 2022.